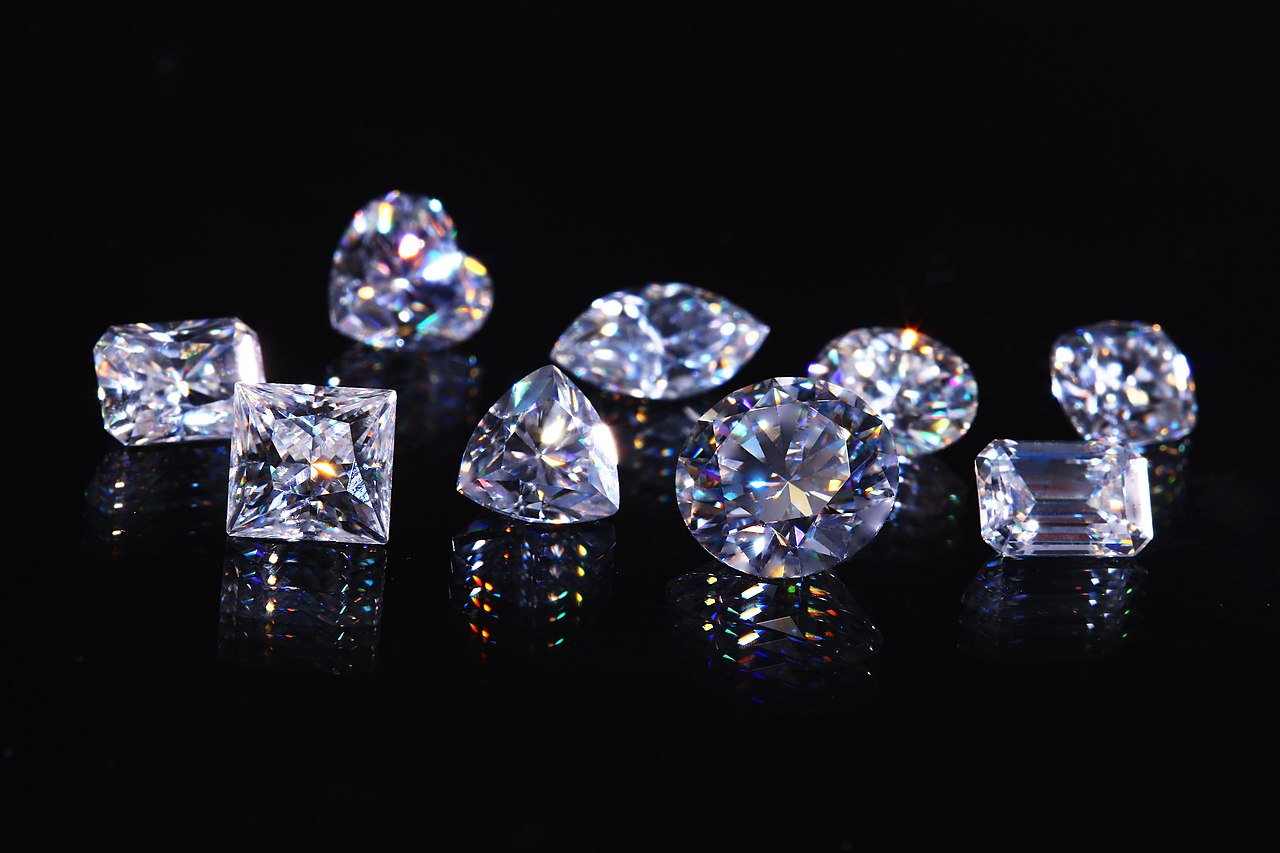 Diamond vs Moissanite: Although they look similar at first glance, moissanite is very different from a diamond. Diamonds are made of carbon, whereas moissanites are made of pure silicon carbide — an extremely rare, naturally-occurring mineral.

Consider the lasting value and beauty of a gemstone before purchase. diamonds and moissanites are distinctly different in brilliance, hardness, composition and color. For a high-quality, excellently priced diamond, contact us today for a complementary search and expert advice.

When you see a diamond sparkle, its the ability to bend and refract light. As light strikes the pavilions (the angled surfaces on the lower half of the diamond), it bounces and is refracted up through the diamond’s table (the top, flat surface) to your eye. When this occurs, it’s called brilliance—a remarkable quality of diamonds.

Moissanites, on the other hand, give off a different type of sparkle. Their facets are cut and formed differently, causing less white light refraction than a diamond. While moissanites do create sparkle, it is not as clear and vibrant as those of a diamond.

In addition to diamond’s signature brilliance, the gemstones also emit fire, which is the reflection of colored, or rainbow light. A moissanite also gives off a vibrant colored light reflection. In some cases and under certain light, the moissanite emits extensive color dazzling—which some people don’t prefer.

While relatively noticeable when looking at a moissanite vs. diamond side by side, the difference in brilliance and fire is increasingly obvious with larger sizes, especially when the gemstones are viewed up close in certain lighting conditions.

Although moissanites and diamonds can look similar in color when seen from a distance or in poor lighting, there are significant color differences between them that are more obvious when the two are viewed up close.

Diamonds are graded on a GIA Color scale from D to Z, while moissanites are not categorized by their color. Moissanites are, however, not colorless and resemble the K grade on the GIA color scale used to grade the color of diamonds.

When under certain lights, yellow and green tints can be seen in moissanites. The larger the moissanite, the easier it is to notice yellow, gray or green tints. At large sizes, it’s generally easy to notice the stark difference from a diamond.

Nearly colorless diamonds, ranging from D to J on the GIA scale, will contain no hints of yellow or gray tinting. Color is one element that make diamonds sparkling white, and it is hard to mistake a moissanite for the clear, natural beauty of a diamond.

Almost all moissanites sold are graded for clarity using a scale similar to that used by the GIA and other grading entities to assess the clarity of diamonds.

Since moissanites are artificial, unlike natural diamonds, it’s very uncommon to see moissanites with a clarity grade below the VS level for sale. In general, the clarity of a moissanite is close to flawless almost all the time.

Like diamonds, moissanites are available in a variety of different cuts. You can find round, oval, pear, cushion, princess and radiant cut moissanites. Some moissanites are even cut in antique cuts that were widely used for diamonds hundreds of years ago.

On the Mohs scale of hardness, a moissanite measures in at 9.25, while a diamond has a score of 10 — the maximum on the scale.

Can Moissanite Be Considered a Diamond?

By both experts and non-experts, moissanites should not be considered the same as a diamond. The two are entirely different gemstones for several reasons, from substance to brilliance to color.

Diamonds are naturally found, formed of the hardest material, and possess extraordinary beauty and value. Moissanites are almost always lab-created and made from silicon carbide. They also have numerous visual differences from diamonds, such as color and light performance.

While from a distance the diamond and moissanite might appear somewhat similar, they are noticeably distinct even to a non-expert’s eye.

How to Tell the Difference Between Moissanite and Diamond

Moissanite tends to refract light more than diamond, producing a stronger level of brilliance. In simplistic terms, this means that a moissanite will usually appear sparklier than a diamond of similar cut and size.

Moissanite usually has stronger fire — the breaking down of light into noticeable spectral colors — than diamond. If you place a diamond and a moissanite next to each other under strong lighting, the moissanite will likely produce stronger flashes of color.

Because moissanites are made in a lab, the average clarity level is higher than that of naturally-produced diamonds. It’s common to see diamonds with blemishes and inclusions, whereas most moissanites have few obvious internal imperfections.

As we mentioned above, moissanites aren’t completely colorless and often show noticeable yellow, green or gray tints when viewed under light. In comparison, diamonds come in a range of colors, from strongly tinted to entirely colorless.

A moissanites will weigh approximately 15% less than a diamond of the same size. While this isn’t perceptible when either stone is held in your hand, a high precision jewelry scale will easily show the difference in weight.

Moissanite is significantly less expensive than diamond, meaning you can buy a larger stone for less money. It’s also far less valuable, meaning you’re ultimately buying a stone that’s worth very little over the long term by choosing a moissanite.

This isn’t something you can easily check by eye, but diamond and moissanite conduct heat and electricity differently. Some diamond testing tools use electricity to detect whether a stone is a real diamond or a different type of gemstone.

If you’d like to consider a high-quality diamond at an excellent price—that will maintain its beauty and value over the long run—contact our experts today. We can begin a complementary search for you and walk you through everything you need to know. We’ll keep your budget, desires and concerns in mind.

Open chat
WHATSAPP
KANJIMULL & SONS JEWELLERS
HELLO. HOW CAN I HELP YOU ?